Forgotten Music Thursday: The Hounds - Puttin' On the Dog (1979) 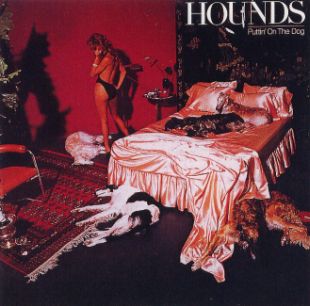 In 1979 John Hunter and The Hounds released their second and final album, Puttin' On the Dog.  While not as strong or ambitious as their debut, Unleashed, their sophomore release has its moments and is still quite enjoyable.

The album opens with a fun rousing cover of Doo Wah Diddy Diddy.  The Hounds interpretation of this rock classic while enjoyable neither takes anything away from nor adds anything to the original version leaving the listener wondering why they bothered covering the song in the first place.

Angel of Fire is perhaps the best song on the album.  It has a fire and energy to it that would not have sounded out of place on their debut and, perhaps more than any other song on the album, it recaptures the overall fun spirit and energy of Unleashed.

Next is yet another cover, this time they decide to tackle the Stones Under My Thumb.  And again while an enjoyable cover it neither adds anything to nor takes anything away from the original version.  It's slightly more enjoyable than their cover of Do Wah Diddy Diddy.

The balance of the album is somewhat uneven-- an original tune, Spiders, a cover of The Kinks Who'll Be The Next In Line, and the album closes with a strong finishing track, Along The Lane.

After further researching this album I noticed that there was a bit of a personnel shift in the band between the 2 albums.  Gone were guitarist Jim Orkis and drummer John Horvath and in their place were guitarist Donald Griffin and drummer Michael Neff.  Given the general uninspired "going through the motions" vibe of the album I'm left wondering if the personnel change was prompted not by Hunter or anyone in the band but by record label executives or producer Jeffrey Lesser.  The absence of Orkis was especially noticeable as Orkis had co-written 4 of the songs on Unleashed.  Perhaps the 3 covers are the result of the absence of Orkis and the corollary lack of his creative input in the songwriting process.

If you've heard and enjoyed Unleashed chances are you'll also enjoy Puttin' On the Dog... You just won't enjoy it quite as much.  If Unleashed was a feast, Puttin' On the Dog is the microwave reheated leftovers of that feast you have for lunch the next day.

Related Links
The Hounds Puttin' On the Dog
Posted by Perplexio at 12:01 AM

I agree with you completely. It's still fun and worth a listen but the first LP is better. Nice review too!

New band for me. I'll have to see what I can find on UNLEASHED anyway. Thanks for the tip.

Workin' On My Cool is the best. It's the most fun. I bought this album in 1979 just for that song. I miss this album. Looking for a digital copy.

Agreed! Unleashed was sorta glammy, in a Mott The Hoople sort of way, funny & fun, occasionally rude, w/ powerhouse rock tunes. Jim Orkis on lead guitar shares the songwriting & the spotlight with Hunter.
Then Orkis was gone.
The 2nd LP, wtf happened? Mr. Roboto meets the Cars...oooof. Cursed with a truly irritating drum sound, at least two too many covers, weak originals, way too much synth, not enough guitar.

The Hounds were always a snothot live band, no matter the lineup.

Columbia Records had no idea how to market The Hounds. Were they punk? Nope. Were they metal? Uh-uh. Both LP covers show a total lack of thought by the Columbia art department.
John Hunter's pair of solo LP's were basically Hounds records.

Hey, so bad the link is no longer available, but thanks for the info anyhow.
Also, great introduction to you in the bottom of the page.

Hi
Any chance you could repair the download link?
Thanks.